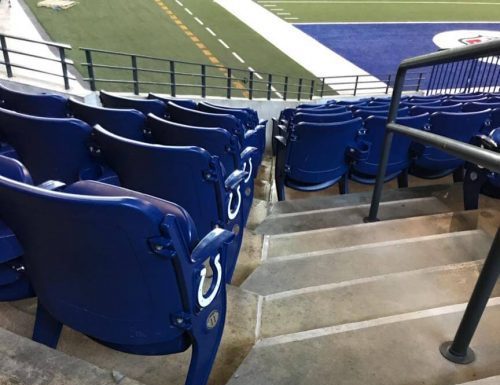 It’s an exciting time for area fans as football season begins and the Indianapolis Colts make their return to action at Lucas Oil Stadium.

That means our team at Robert Haines Co., Inc. is back to work, too, doing our small part toward keeping the structure consistently ranked among the NFL’s best game-day environments.

Open since 2008, portions of the stadium’s original caulking around the lower seating bowl began springing reoccurring leaks about two years ago. Wear and tear factors include regular foot traffic, especially from high heels or any shoes with a small point load that can stab into caulking joints, as well as countless spilled beverages and pressure wash cleanings after every game. In other spots where the building has settled over time, sealants applied over a decade ago can begin to pull loose.

To help, our team goes through as needed and re-caulks parts of the stands that are bad with a stiffer caulking solution that will last for another 10 years.

When the Colts unveiled their monument honoring legendary quarterback Peyton Manning in 2017, caulking around the base of the statue made for an interesting, “top-secret” experience.

The statue was installed after dark the night before its unveiling, meaning our crew’s caulking work needed to be done in the middle of the night so it could cure by the next day. With the design surrounded in secrecy until the official ceremony, team security barely let us lift the statue’s privacy curtain up high enough so we could see what we were doing.

The statue continues to stand tall today and our caulking efforts throughout Lucas Oil Stadium help keep the structure’s foundation sealed and dry. When we are called upon to work at local athletic landmarks like Lucas Oil Stadium, Bankers Life Fieldhouse or Victory Field, our workers who are sports fans love getting those assignments, it’s just another way for them to cheer on their teams.

If your building needs behind-the-scenes or foundational improvements and restoration, including caulking as well as waterproofing, concrete repair, floor coatings and more, our readily equipped and highly trained service department can help.

Trusted by the region’s most recognizable structures since 1936, our team looks forward to getting your building game-day ready for peak performance.