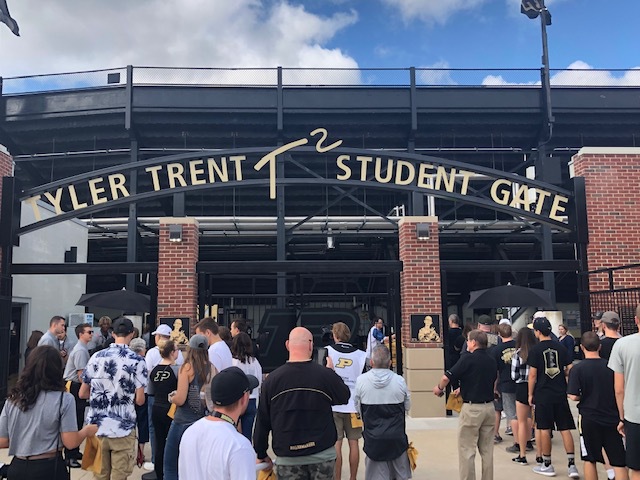 Named in honor of the Boilermakers’ late superfan whose story reached a national audience last season, the entry point replaces the stadium’s former Gate E and was unveiled in a ceremony prior to Purdue’s victorious Sept. 7 home opener against Vanderbilt.

Familiar with Trent’s legacy, Robert Haines Co., Inc. was honored to be involved with the project. We provided all of the caulking work needed at the site of the gate, which is constructed from steel, brick and concrete.

As Purdue fans, we were all touched by Tyler Trent’s passion and fighting spirit. We really felt his memory and loved ones deserved this gesture of respect and reverence that will forever stand tall at Purdue’s football stadium. His story is a real truth for anyone who faces adversity, always looks for the good, never surrenders and believes in something bigger. We should all aspire to be like Tyler Trent.

The gate features Trent’s “T2” signature and a pair of plaques in his honor telling his story. Trent enrolled as a student at Purdue in 2017 and first met head football coach Jeff Brohm while camping out for tickets to that season’s home game against Michigan. The team made him an honorary team captain before Trent was forced to put school on hold as his battle with osteosarcoma, a rare bone cancer, intensified.

Trent became a national figure in the college football world when he correctly predicted Purdue would beat then-No. 2 Ohio State University on ESPN in October of 2018. Brohm and the team presented Trent with the game ball and he went on to make a number of appearances across ESPN’s “SportsCenter with Scott Van Pelt” and the network’s college football programming.