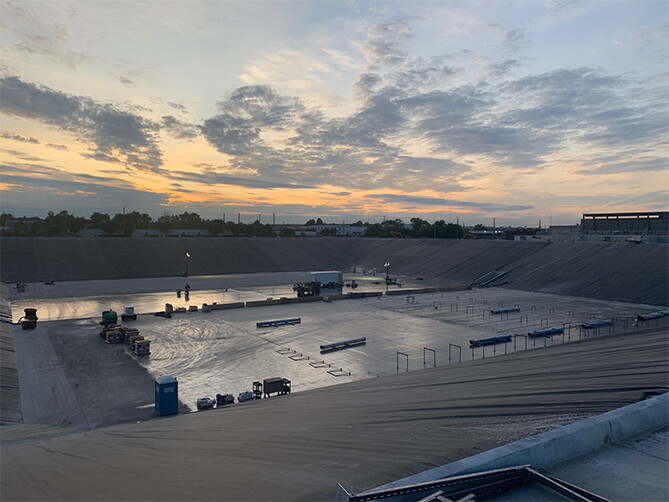 Having been in business since 1937, we’ve completed thousands of projects across Central Indiana. Some are larger than others, but we’ve never tackled a project so large as one recently completed at the Indianapolis International Airport.

Since snow, ice and freezing temperatures have arrived, it’s a project that has already been put to the test.

Most of the year, storm water at the airport is able to drain off with no problem. When airlines start using their specialized de-icing fluid on the planes, they have to catch all of their storm water runoff and contain it because of the harsh chemicals involved and add oxygen to it so the microbial population can consume it.

The de-icing runoff water gets collected and sent to detention tanks, where bubbler pipes can blow in air that helps circulate, evaporate, dissipate and break down those chemicals. The airport will be using brand-new tanks this winter, as the previous detention basins were old and overworked past their capacity.

We caulked joints and coated the bottom of these concrete tanks with a modified polyurea coating to seal and waterproof them.

Before we could apply the coating, we had to rough up the surface of the concrete to prime it for sealing. We used a machine that basically sandblasts but used steel shot to take the top off of the concrete. When you apply a coating, you don’t want a nice, smooth finish — that’s actually the weakest part of the concrete. You want to attach to exposed aggregate underneath, which is stronger and gives a good grip for our sealant and coating.

We bought a special pump for the project that mixes the modified polyurea coating, allowing for it to cure within seconds of hitting the concrete. In the pump’s original configuration, we were lucky to get 10,000 – 11,000 square feet coated in a day. Our project manager, and his team did a great job making modifications to the pump. We were then able to easily coat 20,000 square feet in a day.

And by “day,” we mean night. With any kind of coating, they will stick better when the surface temperature is receding. If the sun is shining and the temperature’s rising, it’ll actually push the coating away as it warms. If your concrete is in the process of cooling, it draws that coating into itself for a more effective seal.

So if you’re flying out of the Indianapolis International Airport for the holidays and they de-ice your plane before takeoff, that de-icing fluid will go from the runway into new, gigantic storage basins sealed and waterproofed by the experts at Robert Haines Co.

We’ve always been fortunate to work on a wide variety of projects. This one was a new experience for our team — it was quite literally our largest project ever.

If you need waterproofing, coating or sealant work of any size throughout Central Indiana, reach out today and we can come up with a custom solution scaled to fit your project.